While you have your tree up you have the perfect opportunity to play around with taking photos with a cool bokeh effect. Bokeh refers to the blurry globes of light in the background of a photo, in this case from the Christmas tree, and it just goes hand in hand with Christmas photos. 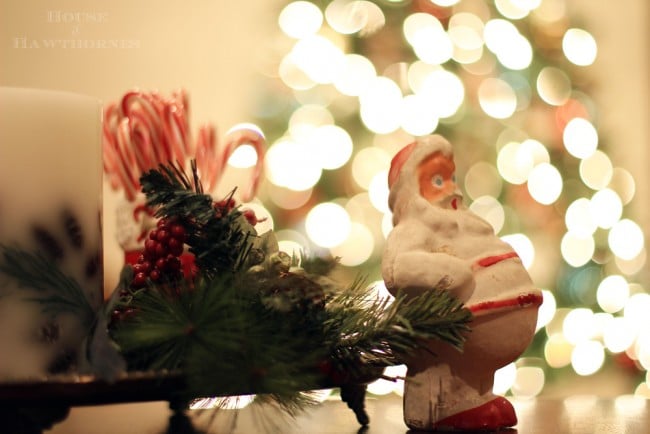 For those with a DSLR (if you don't have one, just skip over this gobbledygook and go to the point and shoot section):

This is my most favorite lens in the whole wide world. 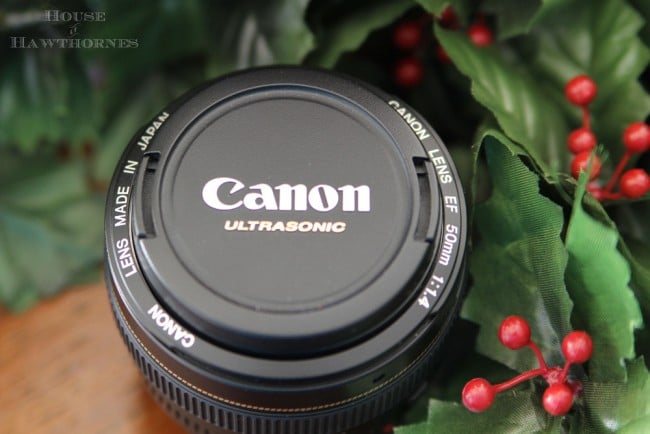 The Canon 50mm f/1.4. It is a prime lens, so it does not zoom in and out, but it takes incredibly sharp photos and can handle low light situations, so you just suck it up and use your feet to zoom yourself in and out. They also have a 50mm f/1.8 that is normally around $100 and is fairly similar. It's one of the best buys in lenses out there. (No, I am not being paid by Canon, I just love this lens).

Shoot in Manual Mode or at the very least Aperture Priority (you need to have the ability to pick your aperture).

Do not use flash, if you can at all avoid it.

Use a tripod or set the camera on a stack of books if you do not have one. To reduce shake even more, you can use the timer (drive mode) on your camera, so it takes the photo a few seconds after you press the shutter button.

You should be fairly close to the object (Santa). From my illustration you can see that I was 2 feet from Santa and Santa was 9 feet away from the tree.

I was actually sitting on the floor in front of the coffee table, but since I have a hard enough time drawing a standing person, a sitting person was out of the question. My artistic talents only go so far, people. I'm not Picasso.

For large globes of light, the object (Mr. Claus) should be farther away from the tree (like my 9 feet) and for smaller bits of light the object can be moved closer to the tree (maybe like 3 feet).

If you want circles of light you need to use the lens at its most wide open (my lens was a 1.4, so I shot this at 1.4). If you are not wide open, then you will get angled circles (hexagons and such).

On this photo I changed from f/1.4 to f/2.8 and you can start to see the angles on the circles.

Which would totally make them not circles anymore, so maybe they are just called octagons. Not a bad look, just not exactly what I was trying for.

If you are too closed, let's say f/6.0, then your lights will be too much in focus and you will not get a bokeh effect.

For those with a point and shoot:

Your best shot with a point and shoot would be to stand far away from Santa (instead of 2 feet from Santa, maybe stand 10 feet from Santa), use the highest zoom setting and zoom in tight on him and hopefully this will blur your background enough to turn the lights into blurry globes.

Or use the portrait mode, which should focus in on the object and blur out the background quite a bit automatically.

I tried it several times with my old point and shoot and honestly couldn't get a bokeh that was anywhere as nice as I could with my DSLR on the Manual mode, but it's worth a shot.

You gotta try new things or else you dry up like an old fruit cake. Sometimes I don't know how to end a post and just put something stupid in there (like now). 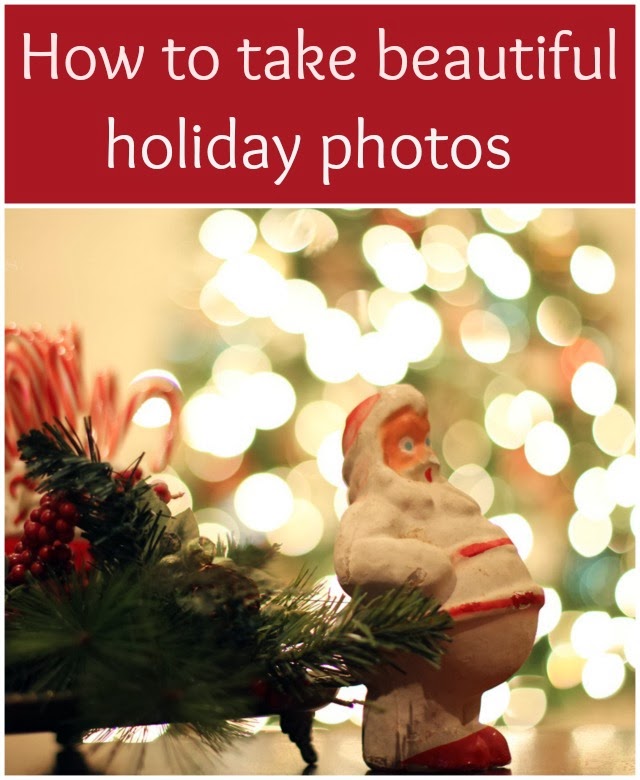