Can I tell you that I have started and stopped posts about this little statue three or four times? I have had him since October. 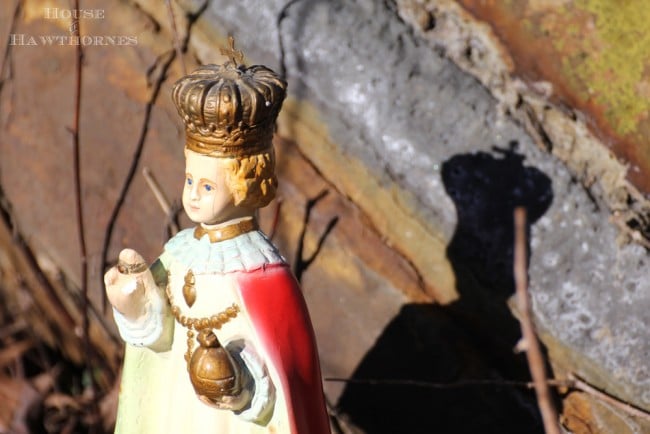 October!!! A lifetime in blog years!

I don't know what's wrong with me. I guess I don't want to offend anyone by saying something weird or irreverent about a religious statue, so I'm frozen in space. Do I call it a statue? Do I call it an icon? Do I capitalize the H in the word "him"? I just don't know!!!!

I do know that I like the statue and it has sat on my desk every day since I bought it in October.

When I saw it sitting on the top shelf at the thrift, totally out of place among the brass candlesticks and smelly cookie tins, I was oddly drawn to the statue. The light jadeite green of the interior of his robe (see, I almost called it a coat) was beautiful. The whole coloring of the statue shouted 1940's to me. 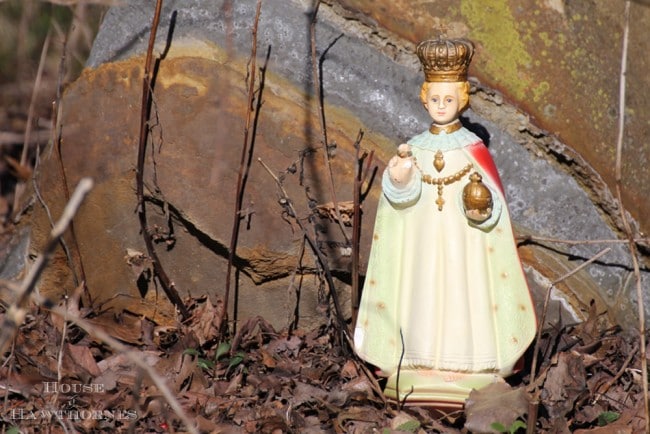 And I just felt that I needed to save him from his lowly resting place. How something like this comes to a thrift store bothers me. Was the owner now deceased and her relatives callously threw it in a donation box?

It wasn't until I checked out that day that I noticed that the fingers on it were broken. Not a big deal to me since I love the chippy and well loved look. But a big deal to the thrift store clerk. She insisted that it should not have made it to the sales floor since it was broken. She told me that they normally throw damaged things in the trash when they are sorting donations.

The trash??? Not the trash!!! Does she not understand what those words do to a hoarder's thrifter's soul!

When I got the statue home and looked it up on the internet, a few coincidences between my statue and the original statue struck me. 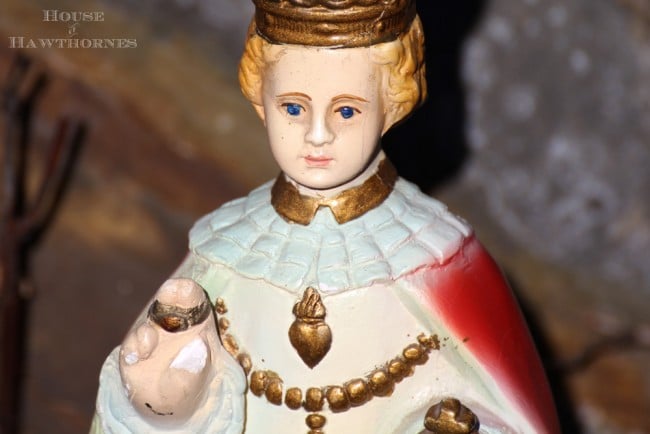 Wikipedia (which we all know is the ultimate true source of all information) tells the story of the original Infant Jesus of Prague statue. To make a long story short, the original statue ended up being discarded in the trash and having its hand broken off.

Trash? The thrift store clerk mentioned that mine should have been in the trash!

Broken hand? Mine has a broken hand!

Coincidences aside, I have thought recently about taking it (see I'm calling it "it", so as to avoid the whole "him" capitalization dilemma) to the local nursing home and seeing if there is someone there that would cherish it for its religious value. It seems selfish of me to just admire it for its prettiness factor rather than letting someone else use it as intended.

What's you opinion? If you were not of the Catholic faith, would you keep the statue because it's pretty? Or find a new Catholic home for it?