Last weekend I found this console table at this garage sale. 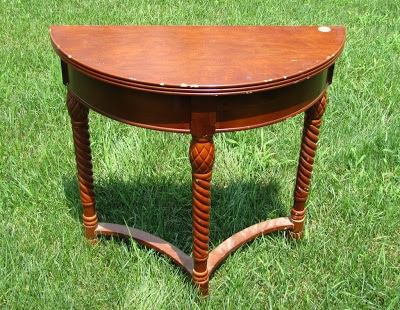 I liked the pineapple detail on the legs 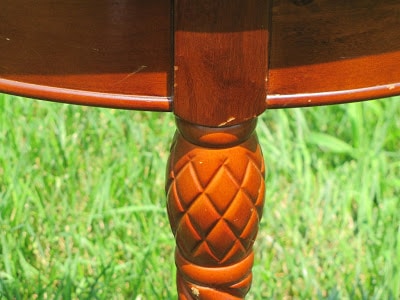 and the top had a wonderful wood grain,
but we had some chippiness problems
and some damage on the stretcher bars between the legs.
This is not an antique. I would say it was made some time in the last 20 years due to its construction. I couldn't use it as is since the damage was so noticeable, so I decided to try a stain/paint look like I've been seeing on some of the furniture refinishing blogs lately.

So I taped off the top and painted just the legs.

I started off with Rust-Oleum's Painter's Touch Ultra Coverage white spray primer and then when that dried sufficiently I applied two coats of their Ultra Coverage Heirloom White satin spray paint.

Now, I don't think I have ever spray painted furniture before, but after painting my black chair with the spindles and thin legs by hand I wasn't looking forward to the crippling hand cramps that would come with painting this by hand, so I opted for the spray paint. 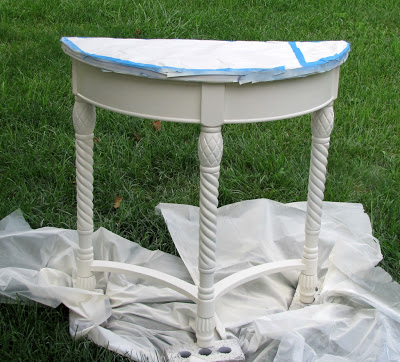 After I painted the legs I worked on the top. In retrospect, I think I should have started with staining the top and then went on to painting the legs. I had some stain drip onto the legs, so I had to touch up the paint. And then when I touched up the painted area, I got paint on the stained area and around and around I went. Oh well, lesson learned.

I sanded the top with my Black & Decker Mouse Sander. 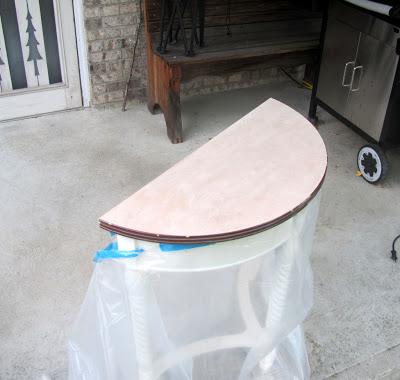 Then I stained the top with Minwax Wood Finish in English Chestnut. I used two coats of stain and topped that with two coats of Minwax Polycrylic in Clear Gloss.

And this is the semi-finished product. 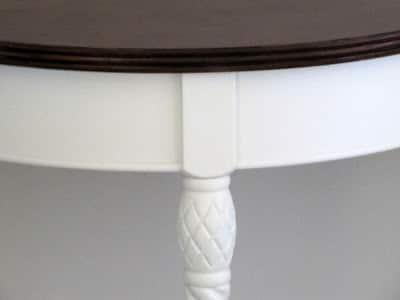 I had originally thought I would do a glaze or stain over the paint to give it an aged character. But after I had painted it the Heirloom White I was having a little bit of anxiety over doing the next step. I lived with it as is for a few days and decided that the current color was too crisp and didn't fit with the stained top which sort of insinuated that it was an older piece that had gone through some different transformations over the years. At least that is what I think of when I see the stained/painted pieces.

So I decided to go ahead and rub some English Chestnut stain over the Heirloom White paint to give it the aged look I had originally planned on. I don't have a photo of that step because it looked like heck. Seriously U.G.L.Y.! The stain adhered way too much to the piece even though I only left it on for a few seconds and was way too dark and splotchy for me.

So I contacted Cassie at Primitive & Proper and she so very graciously helped me with the problem. She suggested using a lighter Golden Oak Minwax to get the look I was trying to achieve.

Genius! Although these photos don't do it justice, the stain did make a huge difference. 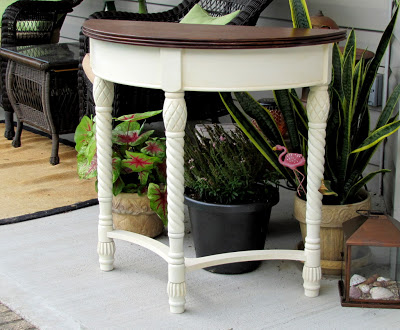 It gave it a nice glazed affect and warmed up the Heirloom White. 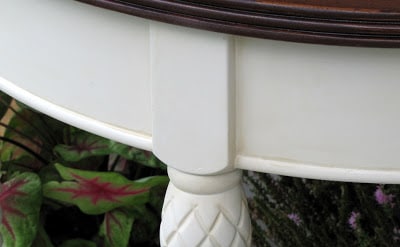 And brought out the detail of the pineapples nicely. Thank you Cassie! 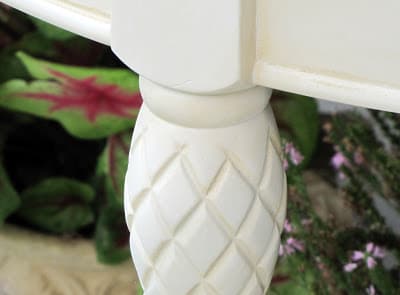 So then you would think I would be done. Nope, I still thought it looked a little too new to me, so I distressed it. 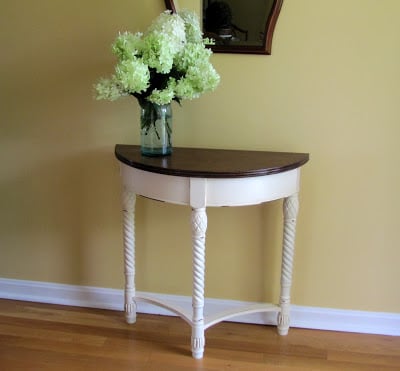 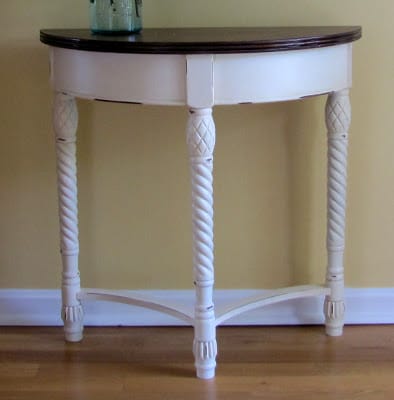 I tried to distress it in the areas that would have been dinged or handled a lot over the years if it really was an antique.
I staged it with a vase of my Limelight Hydrangea.

I just love the off-white and light green tones of the flowers.
And they look great in my huge blue Ball jar that I bought at another garage sale in June.
Now, I had staged the table for the previous few photos in my entryway so I could take advantage of the light and I thought the dark yellow wall would look nice as a backdrop.

But in reality this is where the table has landed. It's in our dinosaur area of the living room. Yep, I spent hours painting, staining, distressing and staining some more so it would like nice paired with the dino.

At least the train can clear the legs of the table! 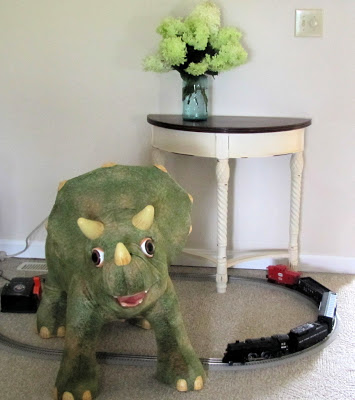 "Come back soon!" (You'll have to imagine him waiving goodbye since his hands don't move). 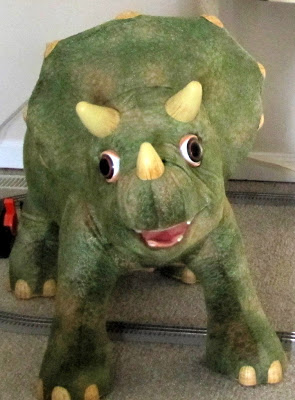