Sometimes a day of thrifting goes right. And sometimes it goes wrong. Oh, so wrong.

Let's start with the "thrifting goes right" part though.

It's been a while since I've been out and about to some thrift stores and antique malls. Gee, that makes me sound agoraphobic or something, but keep in mind that I am doing my KonMari Method For Thrift Store Shoppers plan.

So in a nutshell that means a) I am shopping less and b) for everything I bring in, something else has to leave the house. Bye bye.

But I had had enough of being "good" and it was time to get my thrift on, so I ventured out to a local cheapo antique mall/thrift store to see what deals I could find.

I found this cool, old, bright freakin' RED radio setting outside in the elements. This place has a porch out front and the stuff there is more like flea market merchandise than antiques, so this baby had no business being thrown in with that rowdy crowd! 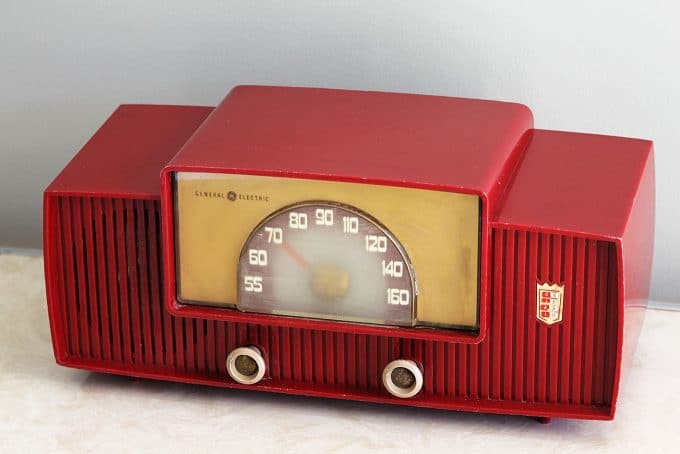 It's a General Electric Dial Beam radio from the 1950's.

I have not plugged it in to see if it works, because my husband has a weird thing about me not burning down the house. But I mainly bought it for show anyhow.

BTW, the face of the radio is a little yellowed and showing its age (aren't we all), so I am going to try a few different things to brighten it up. If they work, I'll let you in on my discovery.

After finding that beauty on the porch, I was stoked to see what I could find on the inside of the place.

As I'm walking around in there, I drop my purse on the floor and all sorts of stuff spilled out and started rolling around. I chased a wandering lipstick tube into the next booth over which was jammed full of junk. As in junk so packed in there and thrown about I would normally never stop to look at.

When I reached down to pick up the lipstick and looked upward I saw VINTAGE PLAID LUNCHBOX NIRVANA staring me in the face.

Can you hear the choral music and see the rays of sunshine beaming down from Heaven on these beauties?

To think I would have just disregarded this booth if it were not for my runaway lipstick!

I didn't want to be all vintage lunchbox greedy and I already had the Aladdin one on the left hand side, so I just bought the Thermos brand one on the bottom right. 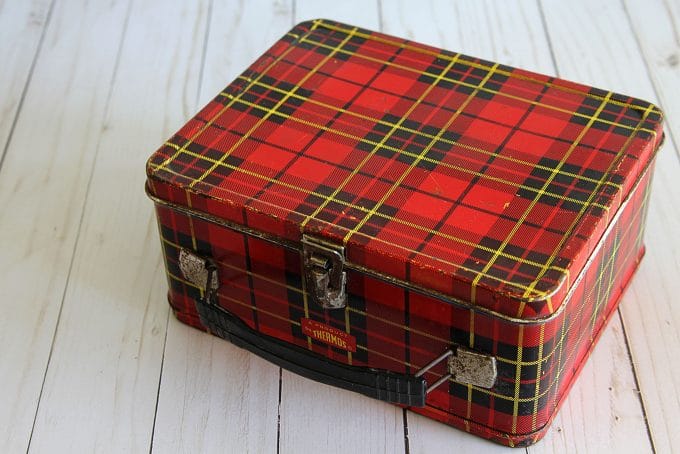 Oh wait, did I mention this is the very same antique mall where I found Dusty a few months ago.

Yep, I think I found his brother.

I have not named him yet, but he's definitely a him, if you know what I mean. It's quite obvious since he's standing up and all.

Now this next thing is the thing I was SO EXCITED to show you guys!!! I just thought it was the deal of the century when I spied it at the thrift store.

And it has an actual use, so it's not like I was just bringing home a dead squirrel or anything.

So I took all sort of photos of it and cleaned it up and fell in love with it. 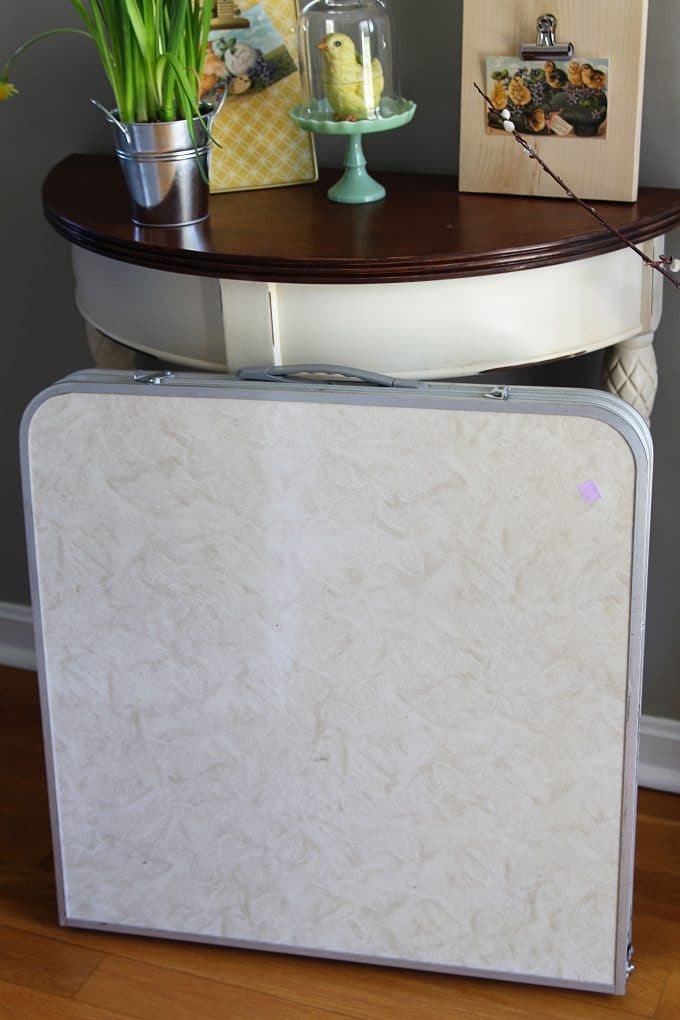 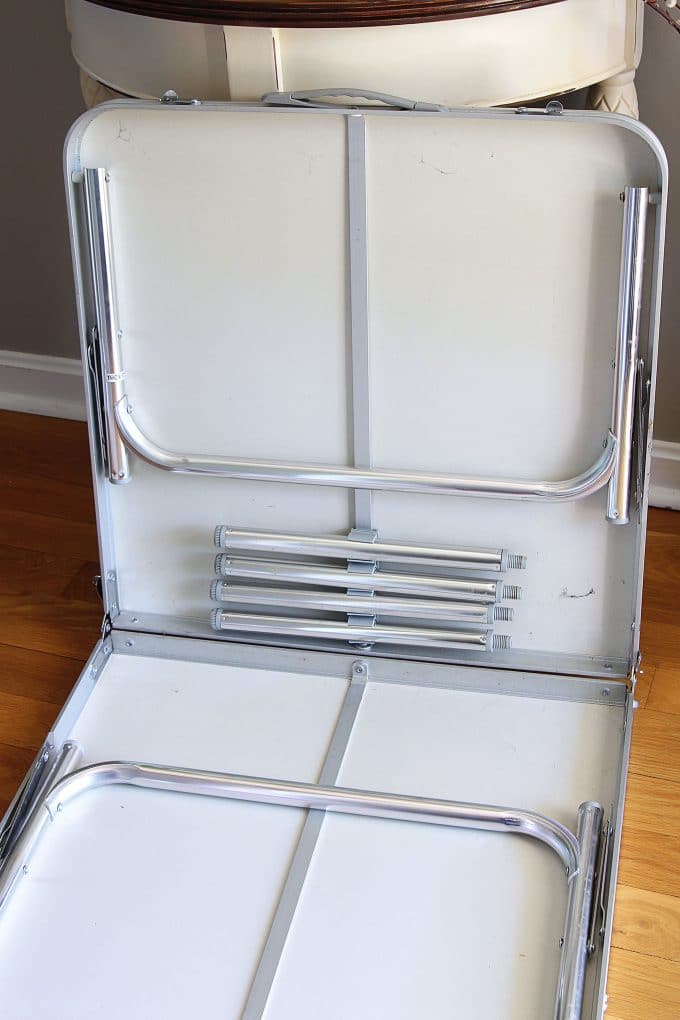 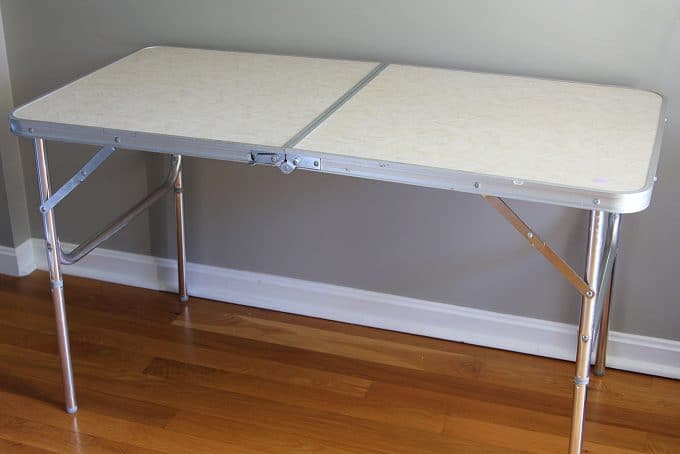 It reminded me so much of a vintage formica table from the 50's that I just let that whole thing cloud my judgement.

Because when I went to post the photos here I thought, "Heck, I should probably tell everyone the manufacturer and what year it's from and all that"!

So I gleefully started looking on ebay and etsy and good old Google trying to find a "folding mid-century formica table" to no avail.

Then I thought I'd try just "folding camp table" and see what comes up.

And yessiree Bob, I had a hit.

From Amazon??? What the hey!

After further review and advice from Google, it appears my find of the century, my one chance at becoming a thrift store legend, my baby . . . was a phony.

I guess not so much of a phony as I had been thinking it was something it wasn't.

In hindsight, the plastic handle really should have given me a clue. 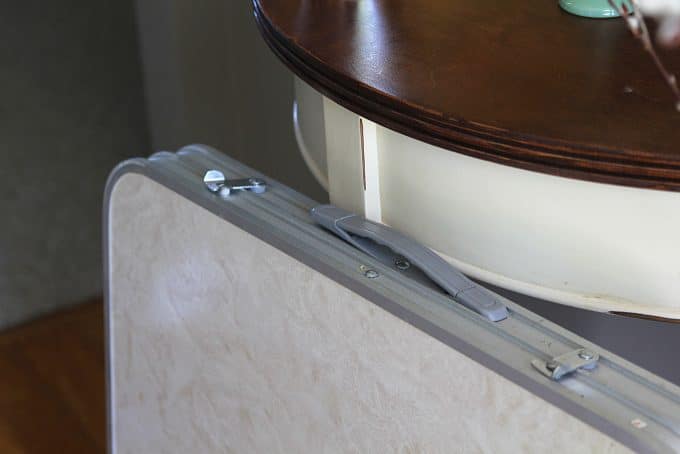 Oh well, I bought it to have on hand to drag in the backyard for quick photo shoots of DIY projects and such, so I still have it for THAT!

((Hangs head in thrifting shame and walks off with well-endowed squirrel in hand.))