Two years ago I found a vintage Hazel Atlas Tom And Jerry set at a local antique mall for a really good price. Of course, I snatched it up.

I got all excited about it and shared it on Instagram and chatted about it on Facebook then promptly forgot about it. Months went by and another Christmas season came and went and I still hadn't used my lovely Tom And Jerry drink set yet. 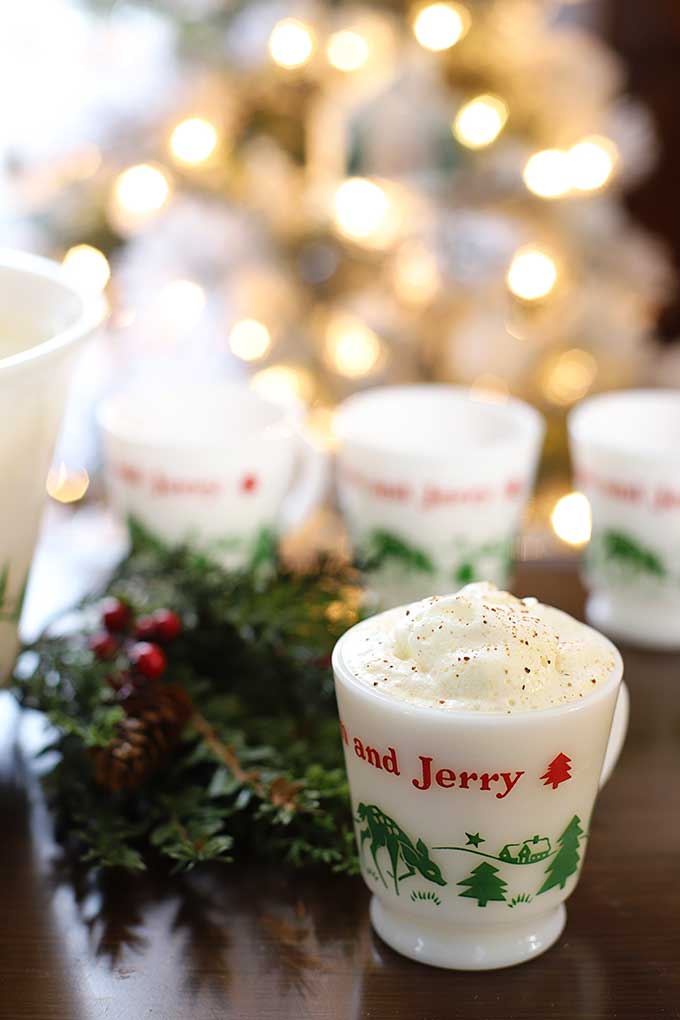 And Good Golly, am I ever regretting not trying a Tom And Jerry before now!

Let's just say it's similar to a warm sugar cookie melting effortlessly in your mouth while unicorns singing Christmas carols dance around your head. 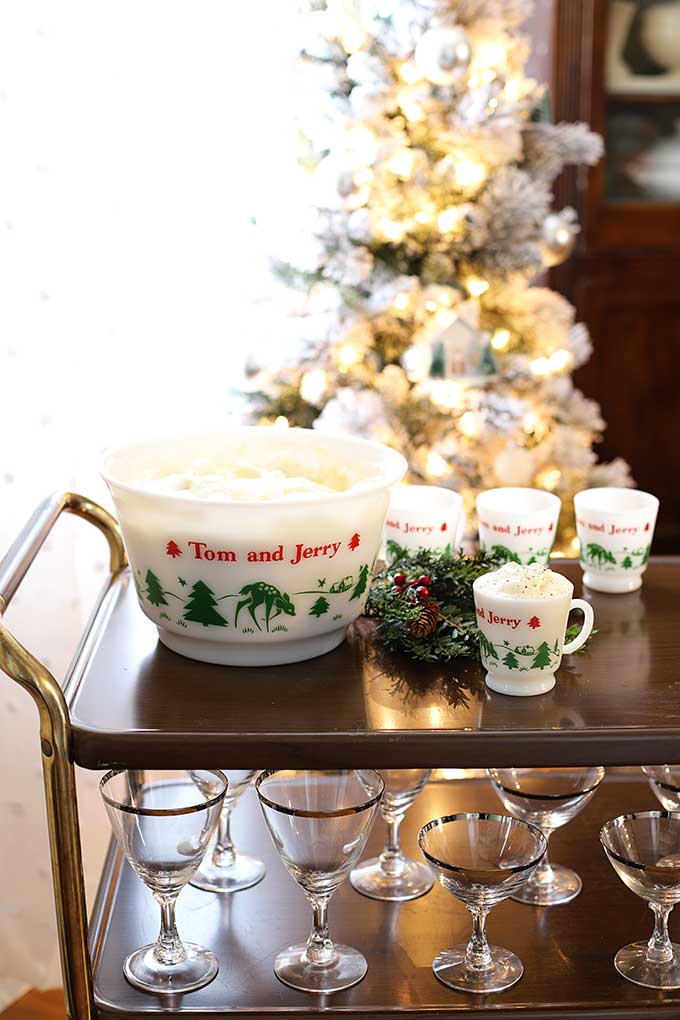 If you're not familiar with the Tom And Jerry drink, it was really popular way back when and a staple of Christmas gatherings. So popular they produced special Tom And Jerry punch bowls and mugs just for that one drink. And then poof, sometime around the 1960's no one wanted to drink the stuff anymore.

People's tastes had changed and the mighty Tom And Jerry drink had fallen onto hard times, but with the recent interest in classic cocktails and all things retro it is now making a comeback

How To Make A Tom And Jerry Drink 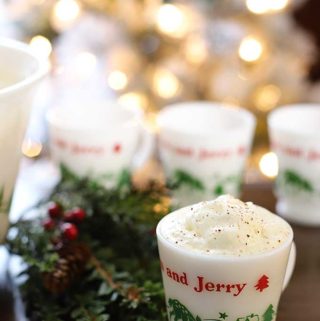 How To Make Tom And Jerry Batter

The batter should be refrigerated when not in use and consumed the same day.

Tips To Whip Your Eggs To Stiff Peaks

Egg Warning: Yes, this drink is made with raw eggs. The batter should be refrigerated when not in use and consumed the same day. It is not recommended that pregnant women, young children, the infirm or the elderly consume raw eggs. I am in no way an expert on food safety though, so if you have concerns about using raw eggs, you may want to find a raw egg alternative at your local grocery store (you can find an article on Pasteurized Eggs 101 HERE).

Tom And Jerry Drink vs Eggnog

Some might confuse Tom And Jerry drinks with Eggnog.

They are somewhat similar, but a Tom And Jerry is served warm and Eggnog is served cold. The consistency of the drinks varies also with Eggnog being a thicker heavier drink than the lighter Tom And Jerry.

And lastly, Eggnog is all mixed up and ladled out of a big self-service bowl (or God forbid, a milk carton) whereas Tom And Jerry batter is premade, but the drinks are mixed one by one as they are needed. 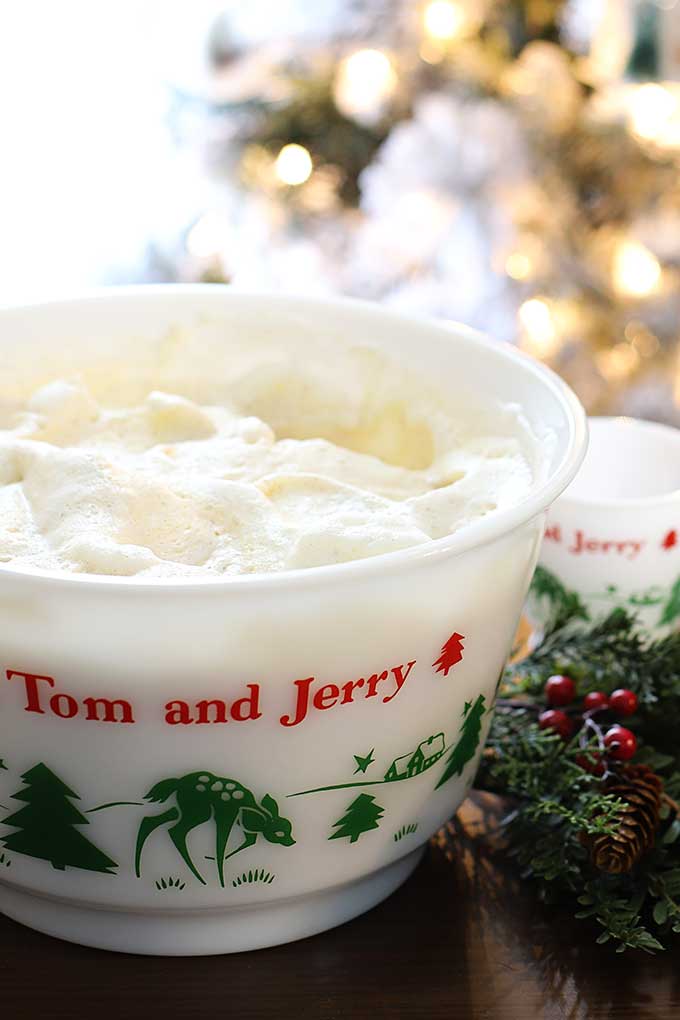 Why Is It Called A Tom And Jerry?

It's debatable who created this classic holiday cocktail.

Some say Jerry Thomas, a bartender in New York who was author to one of the first bartenders guides, concocted the drink back in 1847. So the name Tom And Jerry would be a combination of his last and first name.

The other theory is Pierce Egan, an English journalist and writer, created and named the drink after characters in his 1820's novel called "Life In London, Or The Day And Night Scenes Of Jerry Hawthorn Esq. And His Elegant Friend Corinthian Tom". Could there be a longer title for a book?

It definitely was not named after the cat and mouse duo of Tom And Jerry. That I do know! 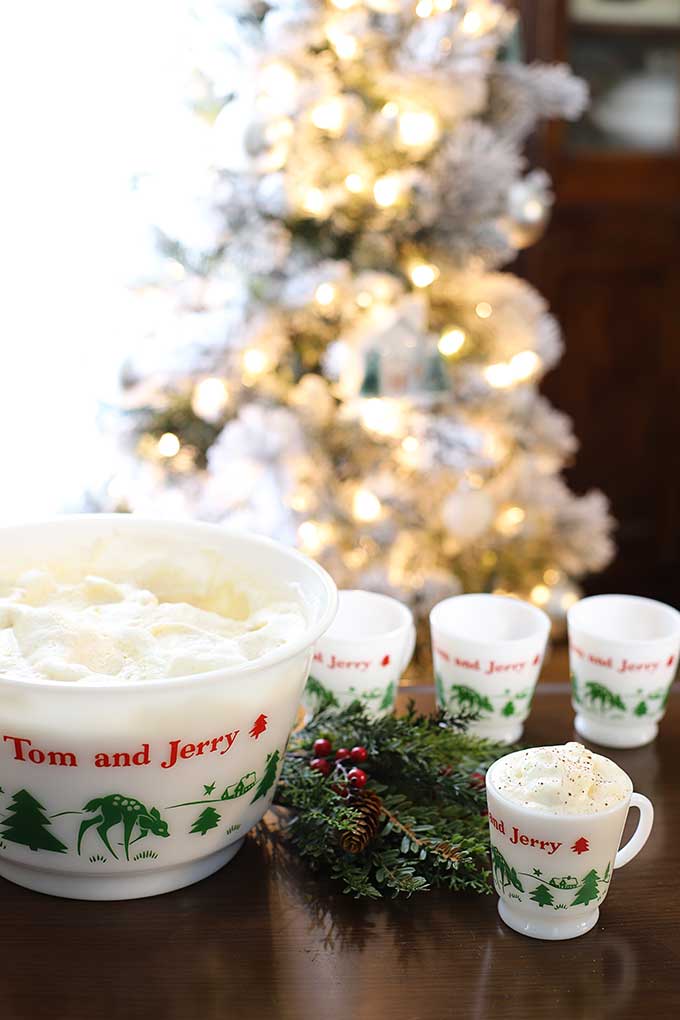 Popular in the 1940's, there were quite a few varieties of the bowl sets made.

The ones you will see most often were made by Hazel Atlas. They were white milk glass featuring a holiday scene in red and green and normally emblazoned with the words Tom And Jerry on both the bowl and cups.

Home Laughlin made some "fancier" cream colored ceramic bowl sets that were gold rimmed with matching lettering. No scenes, just the words Tom And Jerry.

As did Hall China with their black bowls with gold lettering. A much more serious and formal look.

Anchor Hocking's Fire King had some iridescent cups and bowls in their Peach Lustre line (which was really more of a shiny rose gold than a true peach, if you ask me). It's sort of an odd color for a Christmas drink set, but it's one that collectors are always on the lookout for.

I do have to say, I think the classic red and green on white milk glass produced by Hazel Atlas ones are my favorites! Some say they are a little too kitschy. In my book there is never too much  kitschiness for Christmas! 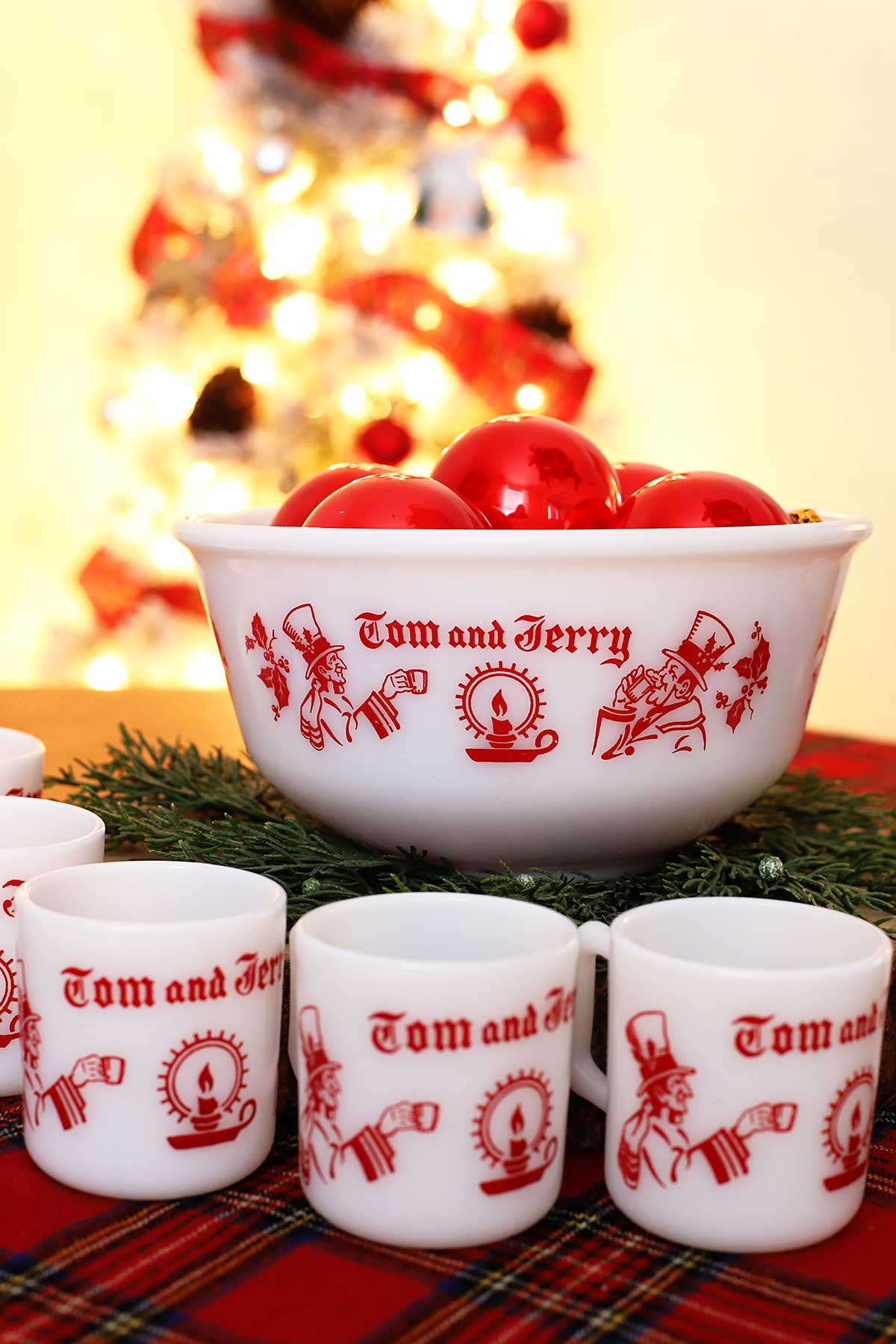 Where To Find Vintage Tom And Jerry Punch Bowl Sets

Etsy or Ebay are your best bets. Sure you can run across one at the thrift store or estate sale once in a blue moon, but full sets are becoming more rare to find. 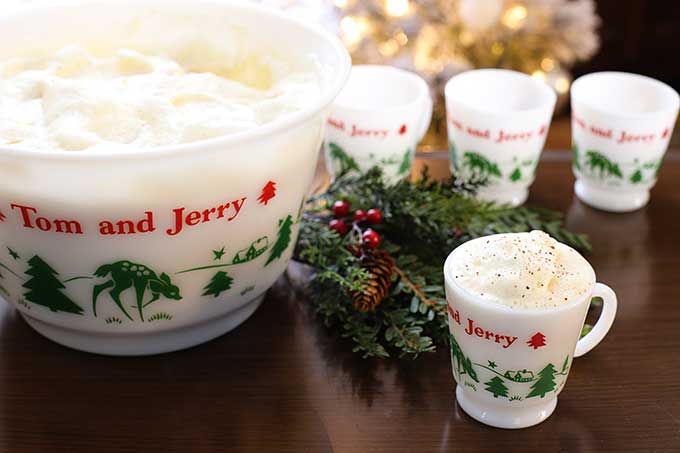 Do You Have To Have A Fancy Tom And Jerry Drink Set?

Absolutely not. It does make it a bit more festive and nostalgic, but using a glass punch set (COMMONLY found at thrift stores, BTW), Santa mugs or even regular old coffee mugs will work just as well. Heck, make them in a paper cup if you want.

How To Make  A Virgin Tom And Jerry Drink

Well, this is pretty easy. If serving this to kiddos and non-drinkers, just skip the rum in the batter altogether and then when mixing the drinks in your glasses, skip the rum there also.  It is still an awesome, festive and tasty drink without the rum.

Have you ever had a Tom And Jerry drink? Were there any unicorns involved?